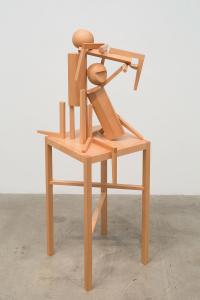 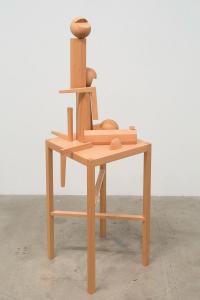 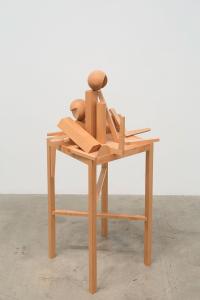 Case No. XXVI, A.K., a middle-aged male, presented on 21 August 2015, an exhibition at the Murray White Room gallery of art, for the attention of the general public. The exhibition consisted of four sculptures, made of beech, which had the appearance of substantially rectified tables topped with constructions made from elements somewhat like children’s blocks. An analyst is immediately confronted by several questions regarding the relationships between the aesthetic and therapeutic nature of such an installation. It is well known that the art instinct motivations are difficult to define. In the individual it is best exemplified in shows and spectacles which are affectively coloured recreations of what the group demands or what it prohibits in conduct. It is therefore an important factor in expression, although necessarily posing problems for interpretation.

Professor Sigmund Freud has offered a number of useful technical suggestions on handling the counter-therapeutic resistances to the treatment itself in a paper entitled ‘Weitere Ratschläge zur Technik der Psychoanalyse (II): Erinnern, Wiederholen und Durcharbeiten’ (1914) [Eng. ‘Further Recommendations in the Technique of Psycho-Analysis: Recollection, Repetition, and Working-Through’]. Each form of action named here is operative in the present case.

Collective motivation is exemplified by mob spirit, group cooperation, customs and laws. Group consciousness and ego consciousness are mutually antagonistic: when one is strong, the other is weak. Yet it is difficult to analyze the aetiology of possible conflict contributing to art instinct motivations. Under ordinary circumstances of human conduct (which is a product of all drive-motivations, largely unconscious), the ego and sex instinct motivations accept the advantages of the group motivations without conflict. It appears, however, that the motivations for the art instinct at once run counter to group motivations whereas the products of the art instinct seek acknowledgement from those same group motivations. The origins of this contradiction are moreover thoroughly obscured by the products themselves. Even when clear themes emerge, it is difficult not to suspect that they have been deliberately concocted as a lure or misdirection for the analyst.

The titles of these four sculptures are an indication: Before, during and after, Old Ways, Sphinxes, and Art Class. The first of these invokes the paradoxes of time: the present is always also a bodying-forth of the past, as it is a virtual incarnation of the future. The second harks back to the continuation of rituals. The third bespeaks the enigma of the archaic, the mythical creature that poses the question that haunts ancient civilization. The fourth signifies one of the primary modes by which individuals can work on themselves to become even more consciously individual in a public way.

In this case, the ego consciousness was involved in an exhibition in which multiple components have been re-collected (or re-membered: Freud’s Erinnern) in such a way that, out of exactly the same elements, quite different objects result. It is clear that what is at stake here is a questioning of the subject regarding the sources and limits of individuation. It seems that the artist grew up in a large family. Families are — at least imaginatively speaking — comprised of different individuals who have been made from the same components, that is, the germ plasm of the parents. It is probable that the artist is working-through by the choice of these materials the infantile desire to single himself out by no longer being either an expression of his parents or just one among many siblings. At the same time, the artist clearly wishes not to break the family compact; indeed, he seeks to be recognized by the family as one of them and as an unique self-made individual at the same time.

Modulating between industrial product, furniture, and decorative objects — without being able to be resolved as entirely functional or decorative — the varied assemblage of the five basic components works as figural suggestion, structural element, and casual off-cut. Monumental yet precarious, connotative yet practical, volumes are established only to be extended or separated. These constructions share many features with those of so-called ‘primitive art,’ which embody a staggering variety of ways in which the relation between figure and ground, figuration and abstraction, representation and illusion, can be created and transformed. Repetitive basic furnishing shapes are deployed to different ends: a sphere can be squashed to become a cranium; a simple incision into the sphere can create the sense of an eyebrow-line or open lips. The artist is here not only re-membering bodies but repeating them (Wiederholen), each time with a difference.

Seen from above, each construction might be taken for a topographical model or an archaeological dig in progress. From below, the components hint at physical eroticism. We cannot decide whether it is an excavation of an ancient ceremonial burial, a languorous post-coital moment, or the membra disjecta of a crime scene. Is this the uncovering of the mortuary rituals of a lost culture? Or it is a domestic interlude, the languid rest of bodies? Or a stage that ciphers the aftermath of violent acts? Does it present a public or a private moment? An exhumation or an interment? Do we catch something in the course of its development or in its decay?

It is presumably these antithetical senses of primal experiences that the subject is working through (Durcharbeit) here. By bringing to light previously-unknown aspects of his formative experiences, he is attempting to remember, then repeat them. In doing so, he seeks to break their hold to fulfil the freedom that is promised always by art.

Comment: This case has been cited chiefly to show that at times it is impossible to study the underlying predisposing personality structure responsible for the type of reaction. In this case the exciting factors of the analysand’s successive exhibitions were extremely difficult to trace, although symbolization was rich.

Back to top View all projects